Hydrogen for heating? A comparison with heat pumps (Part 1)

The two most frequently proposed ways to heat buildings in a low-carbon future in the UK are: hydrogen to power hot water boilers, or electricity to power heat pumps. Hydrogen is being suggested in two low-carbon forms, known as ‘green’ and ‘blue’. 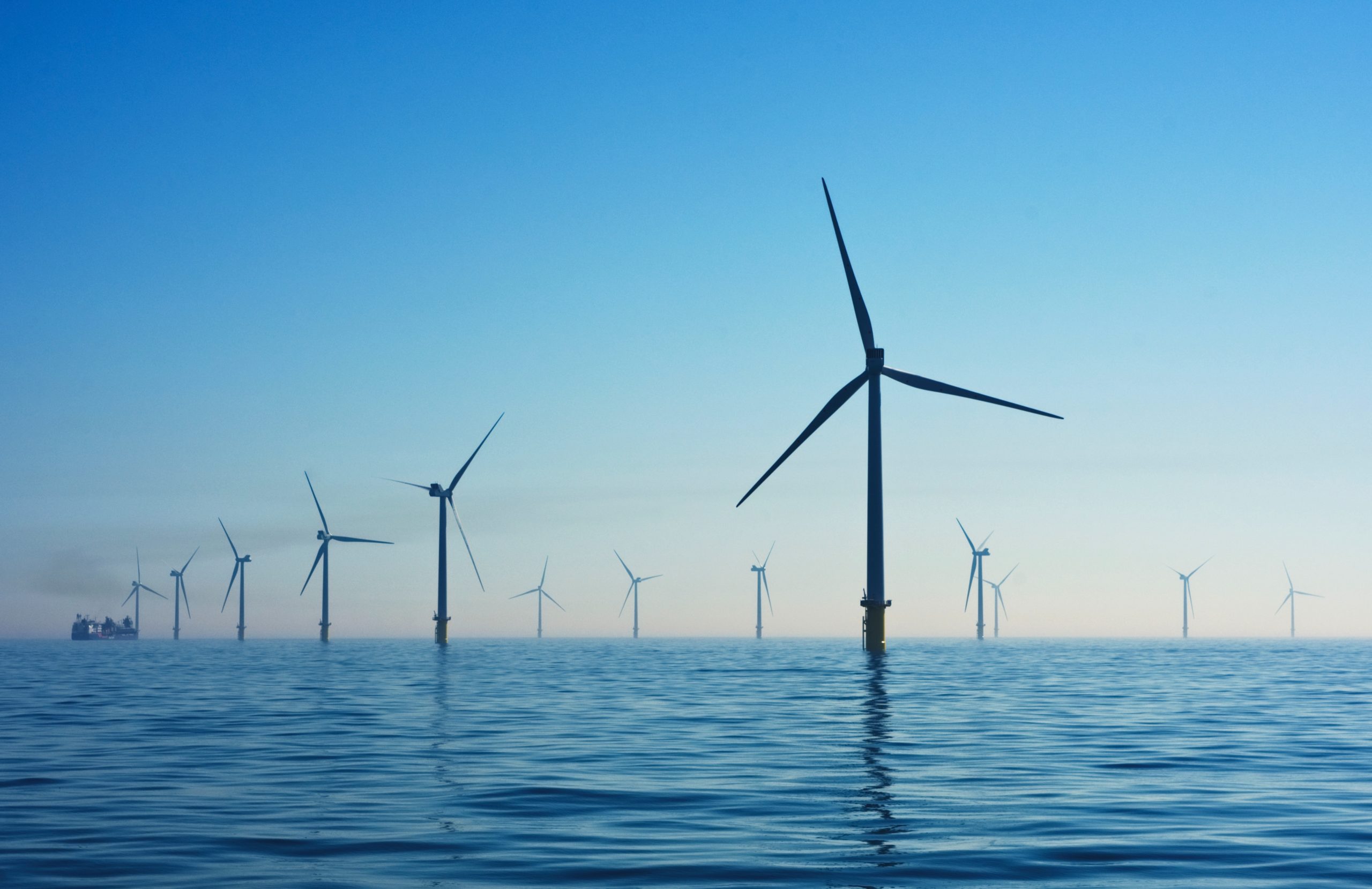 Adapted from the ‘Hydrogen for heating?’ article by David Cebon – Director of the Centre for Sustainable Road Freight and the Cambridge Vehicle Dynamics Consortium; Professor of Mechanical Engineering, University of Cambridge.

The two most frequently proposed ways to heat buildings in a low-carbon future in the UK are: hydrogen to power hot water boilers, or electricity to power heat pumps. Hydrogen is being suggested in two low-carbon forms, known as ‘green’ and ‘blue’. See our data page for more information on how hydrogen is produced.

This two-part article compares the effectiveness of the options available using these methods on the basis of energy efficiency and carbon emissions (Part 1), and technology readiness and infrastructure requirements (Part 2).

The UK’s gas consumption for domestic heating in 2021 was 318 TWh. This equates to an average national requirement for about 70GW of heat through the winter months. Two ways to deliver this heat in a low-carbon future are shown on the right side of Figure 1.

The top half of Figure 1 shows that for a green hydrogen pathway, a large amount of energy is lost as waste heat (purple arrows):

To generate 150GW of renewable electricity, approximately 385GW of installed offshore wind generating capacity would be needed. This would require a sea area of approx. 52,000 km2, shown to scale as the blue squares on the maps in figure 1, with 32,000 of the largest (12MW) wind turbines. 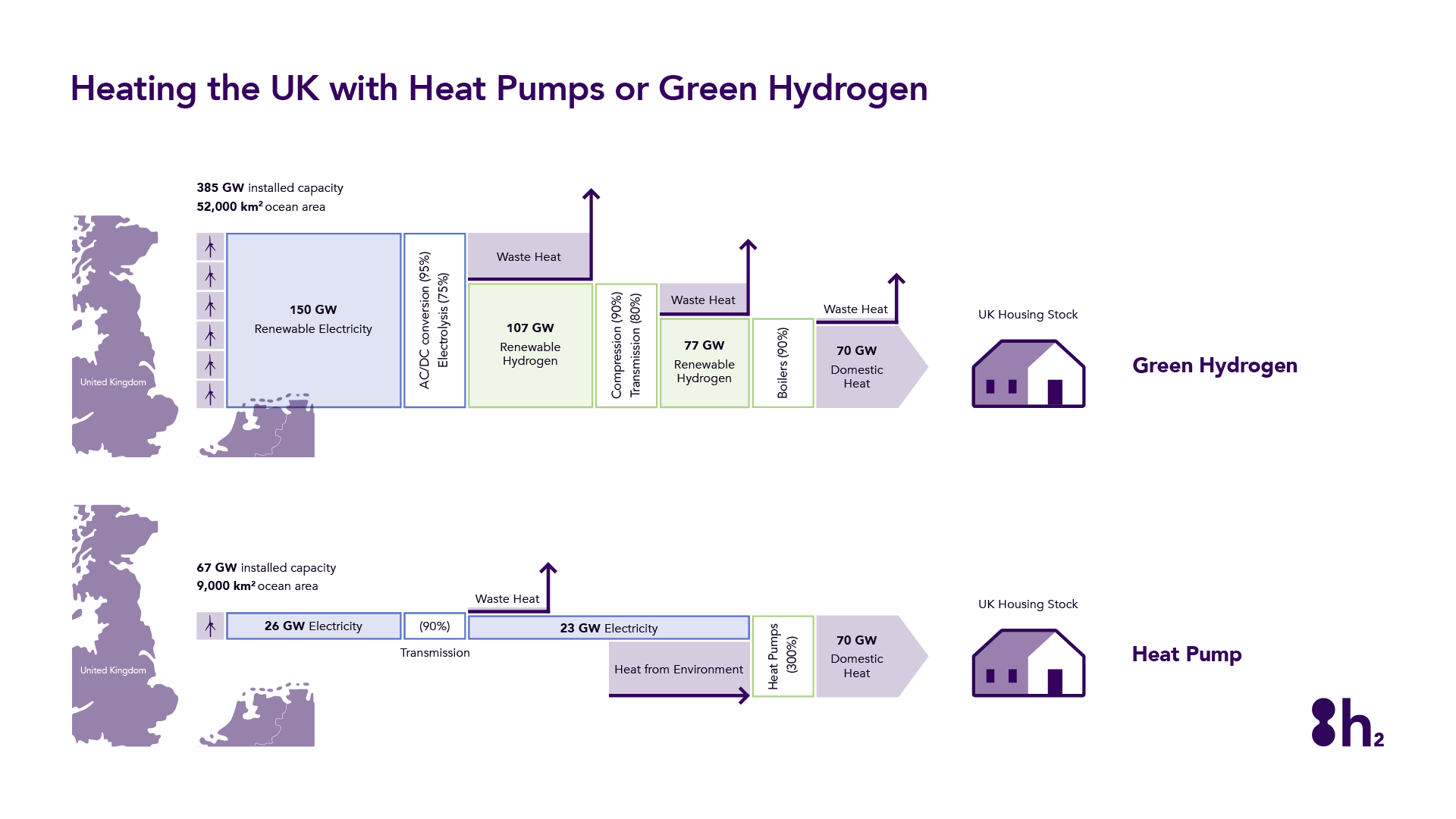 Figure 1:  Providing domestic heating in the UK using either Green Hydrogen or Heat Pumps. The colours of the arrows indicate the type of energy: electricity, green hydrogen or heat. The widths of the arrows are proportional to the power flows (in units of GW). The blue boxes show scaled areas of wind turbine farms on the maps.

The bottom half of Figure 1 shows the more energy-efficient route of using the electricity directly to power heat pumps, located in consumer’s houses.

Heat pumps use electricity to transfer heat from the environment into buildings. This is measured by a ‘Coefficient of Performance’ (COP) which is typically around 3: ie ‘300% efficiency’. Including 10% losses in electricity transmission, the overall efficiency of the process is approximately 270%.

So, to provide the same 70GW of heat to consumers’ homes, only 70/2.7=26GW of renewable electricity would be required. This implies an installed offshore wind capacity of approximately 67 GW, requiring a sea area of 9, 000 km2 with 5,600 x 12MW turbines.

Looking at this another way, the heat pump route is nearly six times more energy efficient than heating with green hydrogen.

What are the implications of this heat pump factor of 6?

It is commonly thought that using green or blue hydrogen for heating is zero-carbon and therefore ‘clean’. This is not correct.

According to UK government statistics, in 2020, the carbon ‘emissions intensity’ of the UK grid was 136 gCO2/kWh. (Every kWh of electricity generated resulted in 136 g of CO2 emissions.) This intensity is gradually reducing as coal-fired power stations are phased out and renewable generation increases, making electricity ‘cleaner’ with time.

Projected future carbon emissions from heating the UK’s buildings can be roughly estimated on this basis (see Figure 2). For example, in 2020:

As a further comparison, a modern condensing boiler burning natural gas generates approximately 200g of CO2 per kWh of heat delivered, which is constant with time, and an electric space heater generates about 160 gCO2/kWh. 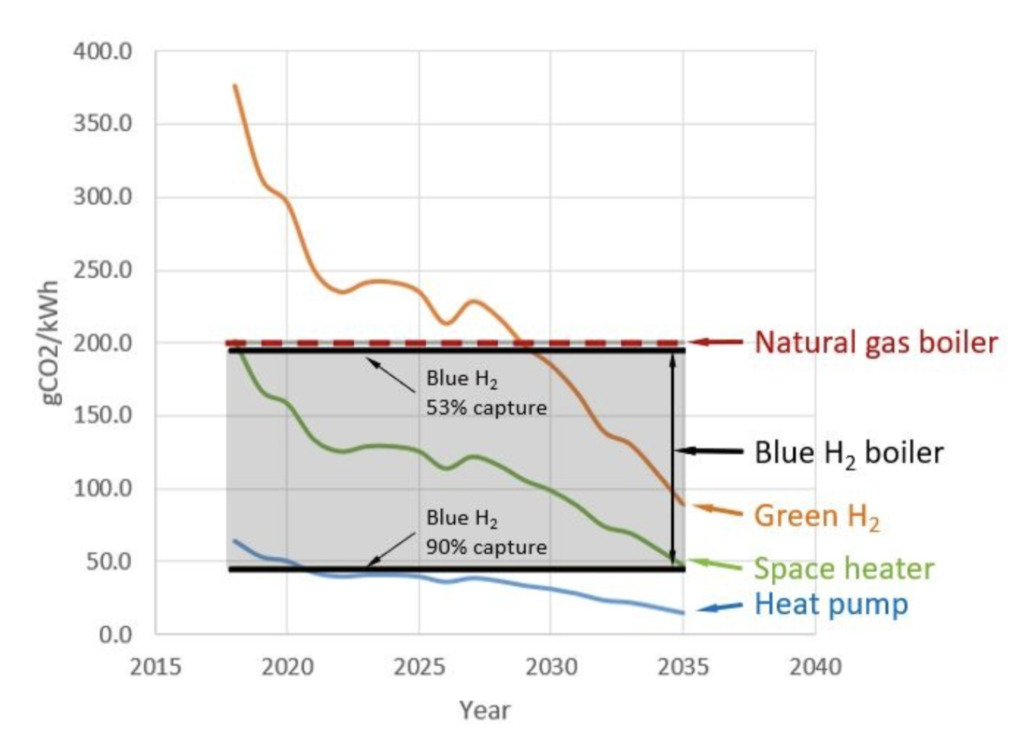 Figure 2 shows that in 2020, carbon emissions of green hydrogen boilers would be about 50% greater than existing natural gas boilers, with projections showing they would not start to deliver emissions lower than conventional gas boilers until nearly 2030.

The process of manufacturing ‘blue’ hydrogen, which involves CCS (carbon capture and storage), is not zero-emission, as carbon capture is not a perfect process. The most effective CCS process available results in 90% of carbon capture but has an energy efficiency of only 69%. Processes with higher energy efficiencies tend to have lower capture rates (as low as 53%). This range is shown as a shaded band on Figure 3. Manufacture of blue hydrogen also generates fugitive methane emissions which would make it impossible to reach the net-zero carbon commitments of the UK government.