Hydrogen is a chemical element which rarely exists on its own on earth. It is not a primary source of energy, and must be produced using existing energy.

In essence, hydrogen is best thought of as an energy carrier, not dissimilar to a battery.

But given the huge amount of energy needed to produce, transport and store hydrogen it is a very inefficient energy carrier. It’s likely it will not be available for use at a large scale.

Hydrogen can be produced from different types of energy.

Hydrogen can also be produced using electrical energy to split water molecules in a process known as electrolysis, creating only oxygen as a by-product. If the electrical energy is made from renewable sources – for example wind and solar energy – then the process is close to zero emissions and called renewable hydrogen. It is often also referred to as ‘green hydrogen’.

It’s also possible to produce hydrogen from electricity made from nuclear energy.

Many governments and businesses are touting a clean hydrogen economy as the key to the energy transition.

The two forms of ‘clean’ hydrogen most commonly considered to decarbonise the energy system are renewable hydrogen and fossil hydrogen with CCS, also known as green and blue hydrogen.

But is hydrogen really a clean solution?

Emerging studies like this one show that the only scalable and truly low-emissions hydrogen is produced from solar or wind-generated electricity.

Other studies like this one depicted in the graph opposite, have cast doubt on the climate credibility of fossil hydrogen with CCS, finding that its greenhouse gas intensity can be up to 20% worse than burning natural gas for heat.

This is because fossil hydrogen with CCS is produced using a significant amount of natural gas, which amplifies the issue of methane leaks in the natural gas supply chain. Human-made methane emissions are up to 80 times more potent than CO2 at warming the climate over a 20 year timeframe.

CCS technology today also only captures some of the emissions, and will never capture 100%.

We can’t assume hydrogen made from fossil fuels and CCS will by default be low emissions. Relying on it as a climate solution is risky, as assessing and mitigating the lifecycle emissions of fossil hydrogen with CCS is a complex issue that could take many years.

Despite the excitement around renewable hydrogen and fossil hydrogen with CCS, large-scale ‘clean’ hydrogen projects are yet to be fully realised today.

So, what role should renewable hydrogen play in the energy transition?

We know that to reduce the impact of climate change, we need to act today. This means using all solutions that we already have. Electrification is already cheaper and more widely available than renewable hydrogen solutions which are still in their infancy.

We should deploy near zero emission renewable hydrogen to replace current polluting fossil hydrogen first, followed only by niche sectors that don’t have existing electrification solutions.

Today the world produces 120 million tonnes of hydrogen annually. 98.7% of this is made from fossil fuels – natural gas, coal or oil –  without CCS.

It is mainly used in making ammonia fertiliser for food production, for chemicals such as methanol and to remove impurities during oil refining.

This fossil hydrogen, also known as grey hydrogen, emits around the same emissions as the global aviation industry every year.

To decarbonise the hydrogen we’re already using today, we need almost three times the amount of wind and solar electricity that the world produced in 2019.

Given how much energy we will need to only decarbonise where fossil hydrogen is already polluting today, we need to take a prioritised approach to where hydrogen is used.

Facts on hydrogen and domestic heating

Hydrogen is inefficient for heating

Heat pumps are cheaper for consumers

Facts on hydrogen and transport 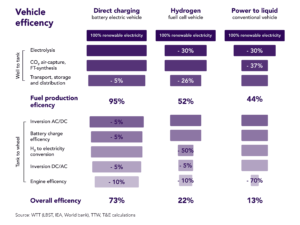 What about blending hydrogen into the existing natural gas grid?

Some governments and businesses are considering blending up to 20% hydrogen directly into the natural gas grid to help cut emissions.

In most European countries, blending hydrogen into the existing natural gas pipelines won’t be possible beyond 20% hydrogen, before needing infrastructure retrofits.

It’s easy to expect that blending 20% of renewable hydrogen into the natural gas grid would save 20% of greenhouse gas emissions.

However a 20% mixture of hydrogen with natural gas in a pipeline has only 86% of the energy efficiency of pure natural gas.

You’d have to burn 14% more of the blended mix to create the same heat energy. This means the savings in greenhouse gas emissions are nowhere near 20% — they’re closer to 7%.

Given how valuable (and inefficient) renewable hydrogen is, blending it into the existing gas grid does not make sense due to its limited impact on emissions savings. Other sectors, like fossil hydrogen today, need to be decarbonised first.

A successful climate action plan means deploying all the solutions we have within the right sectors which will make the most impact on cutting emissions. Hydrogen has a key role to play – but it will be limited to sectors that most need it.

Goodbye gas: heat pumps will be the cheapest green heating option for consumers.

Hydrogen in the Future Energy System: Focus on Heat in Buildings

Hydrogen instead of electrification? Potentials and risks for climate targets.

The limitations of hydrogen blending in the European gas grid

Go to source
We use cookies on our website to give you the most relevant experience by remembering your preferences and repeat visits. By clicking “Accept All”, you consent to the use of all the cookies. However, you may visit "Cookie Settings" to provide a controlled consent.
Cookie Settings Accept All
Manage consent